By Aimé Lachapelle and Yannick Léo
May 2020

The unique analysis of data from more than 30 billion geolocalized steps, carried out jointly by Emerton Data and WeWard, sheds light on the various mobility phenomena observed since the announcement of confinement in France.

The results presented in this report provide food for thought on the one hand on the implications of a generalized and uniform confinement across the country, and on the other hand on the methods of implementing deconfinement or a revised confinement.

The announcement of confinement, made a few days before its effective date, provoked many long-distance pre-confinement trips: around 20% of French people changed departments, mainly in the departments adjoining their place of residence.

To what extent does this massive departure for the 18-45 age group concern family reunification with parents who are vulnerable to covid-19?

A more detailed analysis of nearby journeys (less than 1 kilometer) also shows that the French population, especially in the cities, quickly regained near normal walking activity during the confinement period. After having briefly dropped to 2000 steps per day, pedestrian activity found a level almost equivalent to that observed before confinement at the end of April, namely 5000 steps per day in Paris (compared to 6500 in normal times), in one of the cities densest in the world (20,000 inhabitants / km2), and 5,500 steps per day in the rest of France (compared to 5,500 in normal times).

What is the health impact of this level of movement in densely populated areas? What is the relative impact compared to other individual modes of travel in a non-confined context, for example with the pursuit of professional activity?

In the context of the COVID-19 pandemic, many countries, including France, have chosen to adopt a confinement strategy aimed at drastically restricting the movement of their populations.
As we approach progressive deconfinement, WeWard and Emerton Data have carried out a study on the mobility of the French population. This report is based on anonymized and aggregated data at the departmental or Parisian district level, obtained from users of the WeWard application. More specifically, the results presented relate to more than 40 billion steps taken by 140,000 users spread over the entire territory in mainland France, having the distinction of being made up of rather urban individuals and in the 18-45 age group.

If the confinement divided the proportion of daily journeys by 8 over 10 kilometers, trips of less than 100 metres were doubled.

Since the first days of confinement (end of March), the proportion of long journeys (more than 10 kilometers) has divided by 8, going from 23% to 3%, even though the proportion of short journeys (less than 100 meters) was multiplied by 2.2, from 30% before confinement to 67% at the end of March. In addition, individuals usually moving more than 5 days a week beyond 100 meters, have been moving outside this radius only 2 days per week on average during the confinement.

From April, the analysis shows a resumption of movement, with a reduction of 8 points on the part of individuals staying within a radius of 100 meters (from 67% at the end of March to 59% in April). The resumption of journeys of less than one kilometer is particularly high in the less dense departments such as Corsica, Ariège or Lot.

The percentage of individuals confined within a radius of less than 100 meters increased sharply, from 33% to 67% in late March and then to 57% in April. However, pedestrian routes regained their usual level during confinement, around 5,500 steps / day.

This observation is seen throughout the territory, with notable differences between departments. Paris usually has 27% of individuals staying within a radius of less than 100 meters, compared to 33% throughout France.

Parisians have thus reduced their journeys even more drastically to reach the same level of confinement as on the whole territory, standing at 67%, with marked disparities in certain districts.

The proportion of individuals staying within 100 meters of their home is lower in the less dense departments, such as Lot (53%), Ariège (55%) or Haute-Corse (55%).

Beyond proximity to the home, confinement has impacted daily and physical activity, which is measured by the number of daily steps. In normal times, the panel takes 5,500 steps per day.

At the end of March, the number of steps per day dropped by 61% to 2100 steps per day, then started to rise again and returned to almost normal at the end of April, right in the middle of a period of strict confinement.

In Paris, the drop in the number of daily steps at the end of March is eve more pronounced (71% fall), with a more moderate return to normal at the end of April (23% fall compared to only 2% across the country).

Evolution of daily steps per person

The announcement of the confinement measures generated a significant number of interdepartmental travel, with 20% of individuals concerned. Paris is the main departure centre and Lyon the main arrival destination.

In addition to measures of containment and social distancing, the French government recently set up a departmental piloting of the epidemic.

Interdepartmental mobility is subject to restrictions during progressive deconfinement: limitation of movements to 100% and specific measures according to active traffic and hospital saturation.

The study on WeWard data confirms the phenomenon of interdepartmental travel, observed by many French residents who have temporarily changed their place of residence.

This concerns 20% of French people, including 13% destined for another department. Unsurprisingly, the most urban departments (Paris, Rhône, Bouches-du-Rhône, Gironde, Haute-Garonne, Nord, Loire-Atlantique) have the highest number of departures and arrivals.

Paris is the main origin of departures, totaling 12% of national departures among 18-45 year olds, and representing a proportion of 31% of Parisian residents. Conversely, Lyon is the city with the most arrivals (4% of all arrivals in France). Departments home to ski resorts have emptied  with a high percentage of departures such as Savoie (43%), Hautes-Alpes (41%), Hautes-Pyrénées (27%) and even Haute-Savoie (18%). On the contrary, Corsica has not undergone significant movements (less than 5% of departures and arrivals observed). 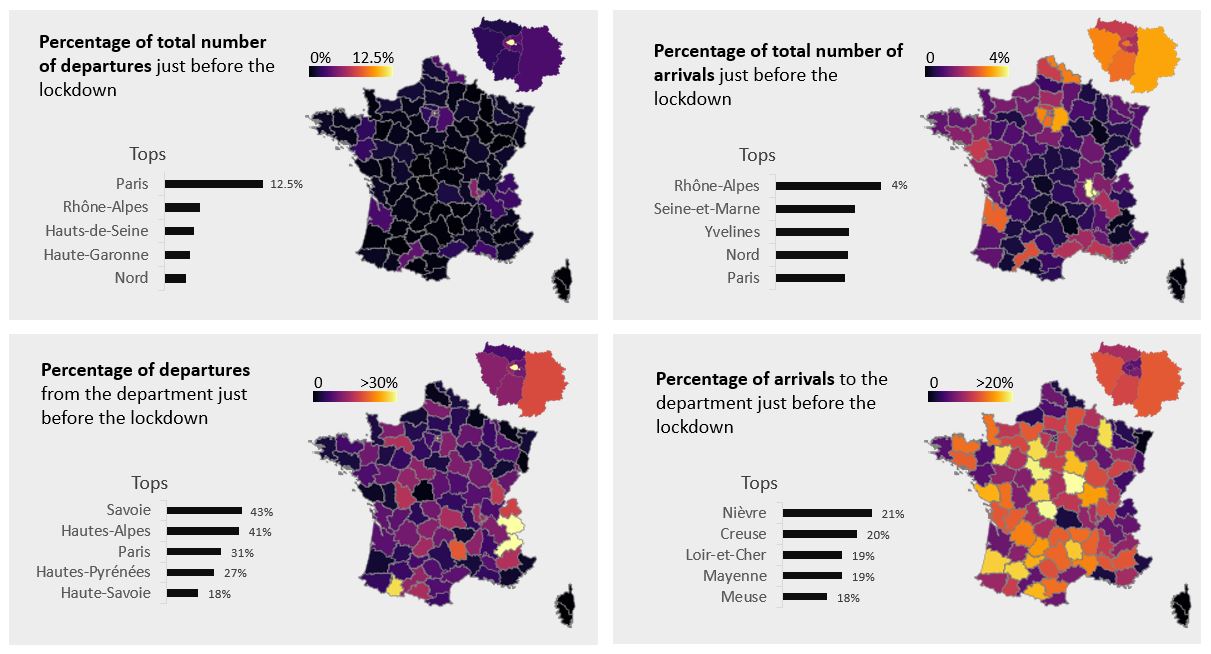 Flows linked to changes of department of residence for confinement

The majority of these trips are, however, limited to neighboring departments, often less than 100km from the usual place of residence.

Departures from Ile-de-France are mainly bound for the neighboring departments, totaling 52% of the trips observed. They also concern the other big cities for 29% as well as the coastal departments accounting for 26% of trips.

With regard to departures from other major French cities such as Lyon, Toulouse, Lille, Marseille, Bordeaux or Nantes, the destinations are concentrated in the departments in the immediate vicinity.

To go further, it would be interesting to explain this phenomenon using more precise age segments (for example by analyzing students aged 18-25). Finally, departures from Savoie and Haute-Savoie are mainly for Lyon and Grenoble.

Interdepartmental mobility when changing residence in the run up to confinement